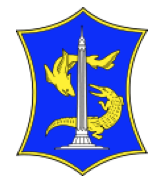 Our day started at the coffee shop of the Majapahit with Pak Liem Ou Yuen, a kind-hearted Surabaya charity veteran, who umbrellas about 60 different charities. To check if KSF could cover some common ground within the framework of Pak Liem Ou Yuen’s initiatives, new ideas were thrown into the conversation.

Energised with freshly brewed Indonesian coffee, the moment had come to meet the legendary Mayor of Surabaya, Tri Rismaharini, alias Ibu Risma, at her official Residence.

It was a great honour that this omnipresent Über-Mayor, who is rumoured to be at different places at the same time, would find the time to receive us. Our mission was to explore, if KSF, together Ibu’s team of ‘Duracell’ town hall officers, could join forces to bring education up to exemplary standards in the Surabaya region.

Apropos ‘exemplary’. Ibu Risma, also a mother of two adult children, has quite something to show for: The minute you enter the city gates of Surabaya, a town of no less than 9 million people, including the metro area, a blissful atmosphere evokes a healthy equilibrium between progress and nature. Garbage and urban curb scrapings of all sorts appear to have been miraculously hovered away. Surabaya’s air is properly photosynthesised and breathable – something Jakarta air fails to be. There is green, and lots of it: almost every street corner boasts bunches of lush vegetation. Water permeates the city, not only the recently- cleaned up River Mas, but also the numerous, newly built fountains to the joy of local children.

There is a sense of integrity about Surabaya’s buildings, its people, and their history. This regional capital is also dubbed “City of Heroes” due to the game-changing Battle of Surabaya, inciting Indonesian and international support for Indonesian independence during the National Revolution that raged from 1945 to 1949. Most importantly though, Surabaya is the birthplace of Kartika’s father, Indonesia’s first and founding President Soekarno. 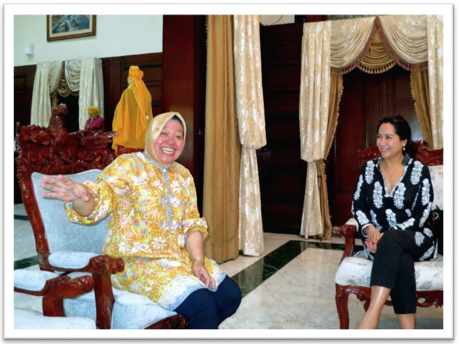 It is this place of historical significance, where Ibu Risma has reigned for over 6 years and shaken the political establishment. Ibu Risma is continuously fighting multi-front battles, which has earned her the respect of her citizens, offering deeds rather than the usual empty promises of politicians. Her reputation of being efficient and straight forward, making the impossible possible, Ibu Risma has become a beacon of good governance that is shining far beyond Java.

After a cordial welcome at her Official Residence imbued with nostalgic flair and a light hearted chat over sweet tea and coco jelly, in true Ibu Risma manner, we got down to ‘business’ instantly. 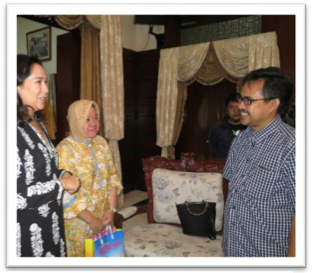 It was agreed that Indonesian teachers lack the necessary education to produce capable and competitive graduates of the 21st Century. In the PISA study (Progress In Student Achievement), Indonesia ranked 64 out 65 nations. The Education Officer, Pak Ikhsan, was called in straightaway to take matters further. Pak Ikhsan was to co-ordinate the KSF teacher training programme with the municipal’s school administration in a few weeks’ time. 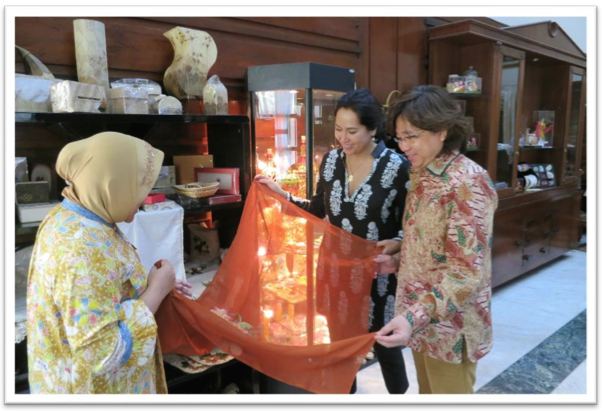 Ibu Risma then proudly presented us with a vast variety of stylish and skilfully produced arts and crafts goods, home-and-hand made by housewives. These women were trained as part of a community initiative to help increase the low incomes of their families without neglecting their motherly duties.

Most generously our wish was granted that Ibu Risma would take us on a tour around town. Not in her car though, as it was not meant to ferry snooping out-of-towners around. Ibu Risma’s iconic ‘Mayor Mobile’ is packed with more important stuff than passenger’s seats: A broom, in case of a garbage emergency, a shovel, should a plant need impromptu replanting, a football, to have some fun with local rascals, black bin bags, and a pair of wellies to master flooding and possibly more unpleasant incidents. And, don’t be fooled, these tools would not be passed on, it is Ibu Risma herself rolling up her sleeves and getting the job done. 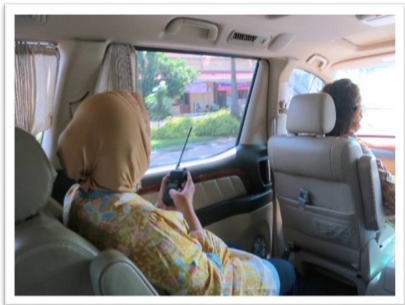 During our cruise around Surabaya, Ibu Risma is not letting go of her constantly crackling Walkie- Talkie, the umbilical cord to her city. 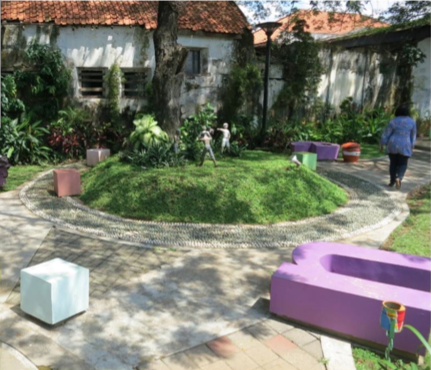 Our first stop is ‘Taman Ekspresi’. This outdoor library, diorama and open-air gallery, is showing art works made out of recycled materials, among other surprising objects. This is one example of her famed 972 ‘Mini Libraries’, commonly placed in pleasant ‘Edu- Parks’. These parks all aspire to have an educational angle, be it history, nutrition or even cancer. The topics are visually explained through figurines and other tangible items, which are poetically positioned within their green spaces. 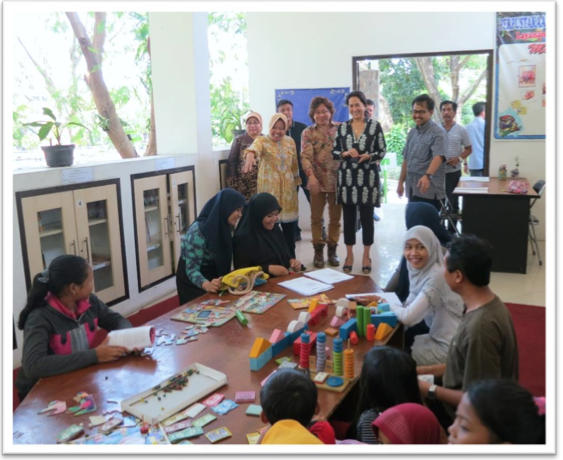 By the way, all ‘Edu parks’ are equipped with free Wi-Fi and have subsequently turned into a vibrant forum for Generation X. Your basic ‘Mini Library’ is equipped with an array of books on everyday matters, such as religion, geography, biology, business administration and more, as well as providing early learning tools. These bibliophilic abodes radiate harmony and peace. They are the perfect environment for parents and children to hang out after school to complement, or possibly advance the school curriculum, or even the parent’s knowledge. 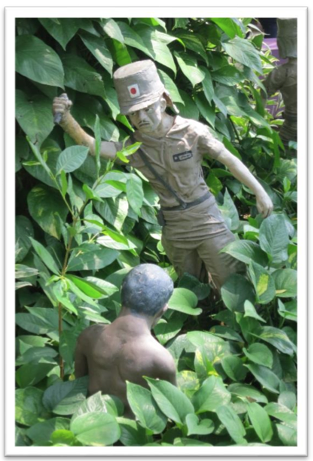 ‘Edu Parks’ are Ibu Risma’s trademark. We are simply awe-struck by this idiosyncratic idea and metropolitan philosophy. 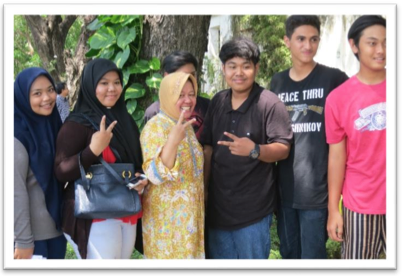 While we are hopping across town, Ibu Risma’s popularity is indisputable. Everybody, young and old, privileged or poor, students or labourer, all came up to say hello and have a casual chat. No protocol, just mutual respect and warmth. 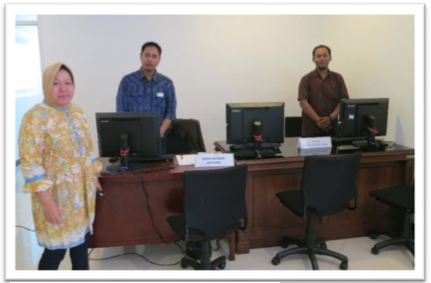 The ‘Ibu Risma Kliniks’ at the youth centre

The youth centre we visited, offered small-group language courses in English and Mandarin, as well as career clinics for accounting, investments, stock reading, computer sciences, and a pop-up job agency.

We stopped for a quick lunch to refuel at Ria Galleria, a chic art gallery-cum-restaurant, a Surabaya institution. Upon arrival we were presented with a tray of extraordinary, luminous rainbow-coloured drinks with frothy coco toppings, immediately raising insulin levels and restoring our energy.

Kartika and Ibu Risma in front of the Rumah HOS Cokroaminoto

With not much ado, Ibu Risma seized the moment and drove us to Rumah HOS Cokroaminoto. This used to be the house, or rather compound of activists, under the auspices of Hadji Oemar Said Tjokroaminoto. HOS was the head of the influential and revolutionary organisation ‘Serekat Islam’ at the time and most importantly the mentor of the young Bung Karno, later the founding father of Indonesia. As a young man, Kartika’s father boarded and spent some of his forming years here. 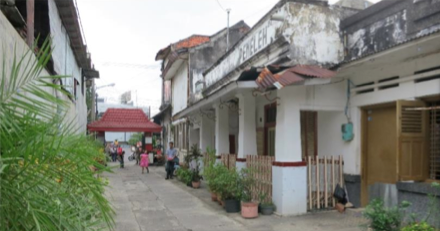 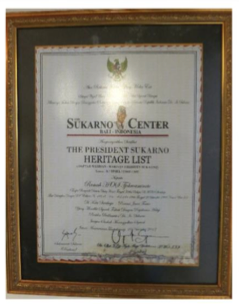 Today these beautifully kept and restored tropical, semi-colonial houses are perched along a calm pedestrian alleyway, stoically reminding of a place, where history was concocted. 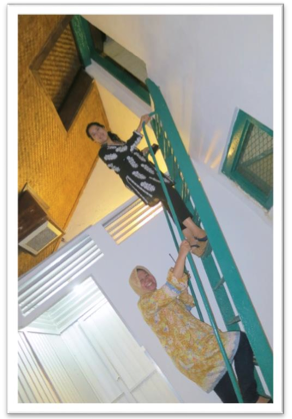  Visiting the sleeping quarters of Bung Karno, as Soekarno was then called 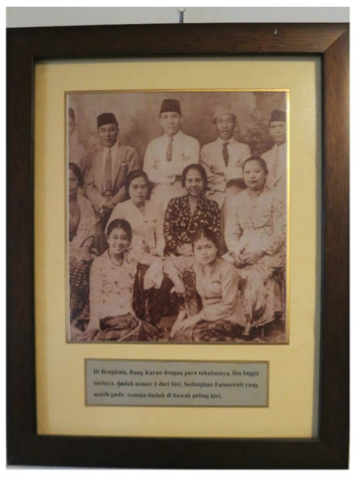 Stirring up emotions of memory and loss, Kartika was moved by the prevailing ambiance of erudition and idealism, defined by memorabilia, sepia-coloured photographs and elegant, art-deco- ish teak furniture, witnesses of a game-changing moment. It certainly was a solemn occasion and I felt privileged to be part of it. 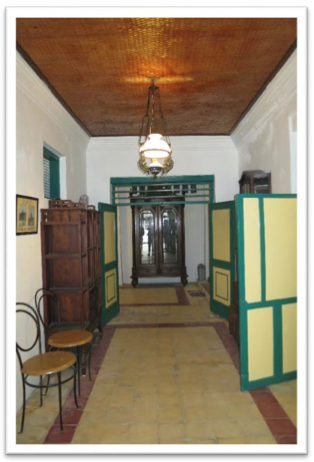 Ibu Risma is admittedly a Soekarno devotee and often takes lots of young school children to this place to teach them about their country’s beginnings and how it came about. 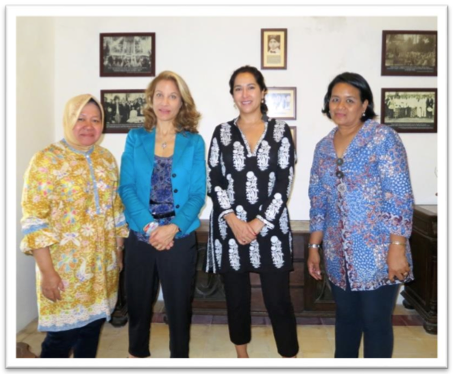 Ibu Risma, Kartika and Juliarty paying tribute to the Founding Father of Indonesia

Back at the Majapahit, we had our last bonding session on global political issues, while a few seats away, a beautiful, young bride was getting prepped by her chatty girlfriends for her big day in a big dress. This is Indonesia’s future.

Jakarta was calling and it was time to say our farewells. Our 24-hour stint to a transformed Surabaya was a revelation with its memorable encounters of visionaries and doers.

A discovery of home-grown Indonesian social activism with global appeal and a cultural commitment to their citizens at large.

At the airport, we are taking our gift bags from Ibu Risma through security, they claim: ‘Surabaya – you will love every corner of it’. Indeed, we did.