The Kartika Soekarno Foundation for Indonesian Children (KSF) was founded in 1998 in response to the Southeast Asian economic crisis. Working closely with UNICEF and CARE-USA, KSF raised considerable funds for the ‘Preventing a Lost Generation’ campaign, a programme designed to keep young children in school during the period of severe economic hardship.

KSF continued to raise funds for UNICEF’s Indonesia programme but in 2004, having built a very experienced and knowledgeable team based in Jakarta, began funding independent education programmes in three districts across the archipelago, shortly followed by health programmes in another three districts.

Our active Board of Directors devote their time unpaid, and include highly knowledgeable professionals such as former UNICEF Country Director for Indonesia, Stephen Woodhouse. 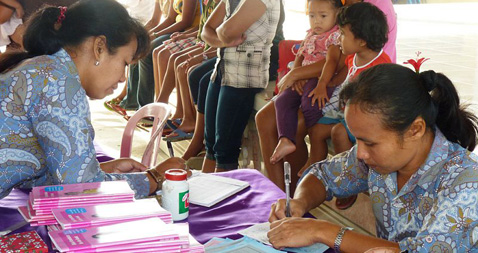 Indonesia has a proud heritage of ‘gotong royong’ – a beautiful tradition of community self-help and volunteerism which also engenders female empowerment. KSF believes gotong royong and collective community action is central to the social and economic development of Indonesia. Our programmes work within such existing community networks  and re-invigorate them, supporting them to reach a level of self-sufficiency and sustainability in core health and education services.

KARTIKA SOEKARNO KSF Founder Born in Tokyo, Kartika grew up in Paris. After completing her degree in the US, she worked as a TV reporter in Tokyo.

In 1998, she founded the Kartika Soekarno Foundation for Indonesian Children based in New York. In 2005, she moved to London where Kartika continued to carry on her foundation work with regular trips to Indonesia to ensure the programs that had been created through the Foundation were being sustained.

In August 2011, Kartika with her husband and son relocated to Jakarta. This has given her the opportunity to work more closely for her Foundation on a daily basis.

Kartika’s humanitarian work has been honoured by awards from H.R.H Duke of Braganca in 2005 and from the Sultan of Solo in 2008.

Glenn Alinskie Bapak Glenn Alinskie is a public figure with a cause aligned with those of KSF's and shares the same passion with KSF. He has embraced with his wife Chelsea Olivia numerous humanitarian activities. Glenn is presently taking an online course for Child Protection At Harvard. He has pledged to share his talent to promote and improve our important work for children and Indonesian women. Glenn has 10 Million Indonesian Followers, a public figure with the perfect Cause. His work is very much complimentary to KSF's mission, and we are very pleased he will be a member of KSF Family. A huge welcome to Glenn Alinskie and Family.

STEPHEN WOODHOUSE KSF Executive Director Stephen Woodhouse has more than 40 years of experience working for children’s rights. Formerly the UNICEF Regional Director of Europe and Country Director for UNICEF Indonesia and Malaysia, he began his career as a UNICEF volunteer in Indonesia in 1969 and went on to become the UNICEF Country Director from 1995 through 2000. During this time, UNICEF Indonesia worked very closely with Rotary Club Indonesia to successfully eradicate polio by immunising 23 million children, mainly through posyandus. Stephen’s invaluable knowledge on health and education interventions for children is compounded by his understanding and appreciation of Indonesian social norms and institutions, putting him best placed to guide the operations and strategic framework of KSF.

Stephen Woodhouse has been honoured with an OBE Award from H.R.H Queen Elizabeth II and the International Rotary Club Award for his exceptional contribution to humanitarian work.

YUSMANETTI SARI Health Programme Coordinator Yusmanetti Sari has more than 5 years of experience providing high quality care and support to increase community health and early childhood development services in Indonesia working with KSF and Jalan Sesame (Sesame Street Indonesia.) She joined KSF in 2007 and leads KSF’s Posyandu Revitalisation programme. She works with key stakeholders to maximise the independence of local communities to increase Posyandu services that aim to reduce maternal and neonatal mortality and malnourishment among children. Yusmanetti has a degree in Human Health, Food and Nutrition from the Bogor Institute of Agriculture in West Java, Indonesia.