Sun, May 25 2014, an article written by Kartika Soekarno in the Jakarta Post:

I recently had a chance to spend the day with Tri Rismaharini, the woman who is the famous incumbent mayor of Surabaya, East Java.

Following a pleasant meeting in Jakarta, where we shared our visions for better primary school education and better environmental conditions in Indonesia, we vowed to meet again soon.

Ibu Risma kindly invited me to visit Surabaya for a closer look at her work, so it was with mild anticipation (or nervousness) that I met her again at her official residence in Surabaya.

The anticipation (or nervousness) I felt came from a breaking news report about an outburst following the damages wrought to the city’s Bungkul Park during a free ice-cream day.

Risma was on time — a good start. After discussing a potential project together, she showed me a diverse collection of handicrafts made in Surabaya, ranging from glasses, baskets woven from banana leaves and batik.

The mayor then obliged my request for a personal tour of the city.

However, with a little embarrassment, Risma asked that we use my car instead of hers and then we started with a stop at Ekspresi Park.

I was impressed by the cleanliness of the park, which lies near the Brantas River. There was garbage neither in the water nor on the grass.

The children’s library was a clean, well-organized place with books on languages, human anatomy, geography, flags and more. Children were seated around a table learning English and playing educational games.

Elsewhere in the park were carved wooden letters as well as statues of various characters from Indonesian history, including Prince Diponegoro and heros from the period of the Japanese occupation and the Proclamation of Independence.

I have never seen such a clever idea for a park, combining recreation with education.

As we proceeded, I noticed many adults and children stopped to pay their respects to the mayor, who was very approachable.

We continued to a clean and air-conditioned language learning center that also offered computer classes. Some students were busy learning English while others learned how to use presentation software.

Next was a youth center with another children’s library and an educational playground where parents and children mingled and read books together.

In another room, some young women in jilbabs were rehearsing for a contemporary musical. For a moment, I thought I was at the Venice Biennale.

We ended the tour with a visit to the house of H.O.S Tjokroaminoto, where my father stayed during his student years.

Tjokroaminoto was Sukarno’s spiritual independence leader. Risma prided herself on often taking children to the house to explain that their first president — a man who became a world leader — began his life in this modest house.

On the same street was the first bookstore where my father apparently borrowed books. On behalf of the government, Risma took the initiative to turn the house into a historical site.

I was happy to have a glimpse of what an old Javanese street looked like and to see a simple yet elegant period building. The woman has a sense of history and pride.

Could we clone her to stop the sale of land around Borobudur temple? Apparently, 24,000-square meters of land were recently sold off to three separate investors, one foreigner and two from Jakarta.

It’s reckoned that about 10 “investors” come knocking each day. There is not a hill overlooking the temple that has not already been bought as land for future hotels.

Soon, Borobudur, Indonesia’s gift to her children and to the world, will rest in a lake, not of lotus flowers, but of tasteless hotels — employing people from afar and complete with Bali-style villas wrapped in three-meter-high walls.

Borobudur is not Angkor Wat. The monument does not benefit from the protection of a 400-square-kilometer archaeological site. And this is exactly what Borobudur needs.

Back in Surabaya, after a beautiful day together, Risma entered her car. While we were waving goodbye, she jumped out to tell me why she did not want to use her vehicle show me the city.

It was full of toys, soccer balls and children’s rain boots. Risma showed me the items one by one, explaining that she was distributing the items herself to needy children and that her car was not suitable to host me.

These were my last images of Ibu Risma, a hands-on mayor close to the people’s hearts.

The world-famous actors and producers Jeremy Irons and Sinead Cusack proved their credentials as social activists during a visit to Gianyar last week to observe the work of the Kartika Soekarno Foundation (KSF). Kartika herself lead the tour starting off from Villa Idanna in the idyllic setting of central Karangasem to Kengetan in Gianyar, where KSF has been revitalising and improving the Posyandu system. The KSF model adds in early childcare activities in addition to the nutrition and health improvement for infants and young children that represents the traditional work of the Posyandus. During the long journey between the villa and the Posyandu, Jeremy and Sinead listened very carefully to the briefing provided by Kartika and by Steve Woodhouse (KSF Executive Director). Kartika and Steve explained why Posyandus represent such sound investments in maximising the potential of infants and young children and discussed the management of the Posyandus. It was impressive that Jeremy and Sinead asked such probing questions during the mobile briefing and caused the stunning scenery being driven through to take second place to the briefing!

Upon arrival at the Posyandu, the visitors toured the facilities and were clearly very impressed with the high level of motivation of the Posyandu volunteers. Kartika earlier had designed unique and highly attractive uniforms for all volunteers which they wear with great pride, especially knowing that Kartika herself similarly proudly wears the uniform!

Jeremy and Sinead evinced strong interest in the development of life skills and attitudes in the early child care section of the Posyandu. The development of initiative, creativity, self esteem and self confidence, along with social and communication skills, come from the way the children aged 3-5 learn and play at the Posyandu. These attitudes remain life-long so again Jeremy and Sinead could see how useful the work of KSF is in ensuring that the potential of young children is maximised. 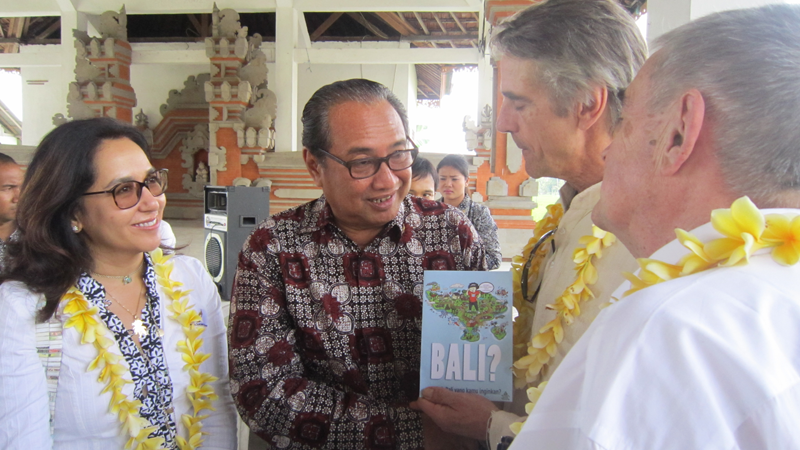 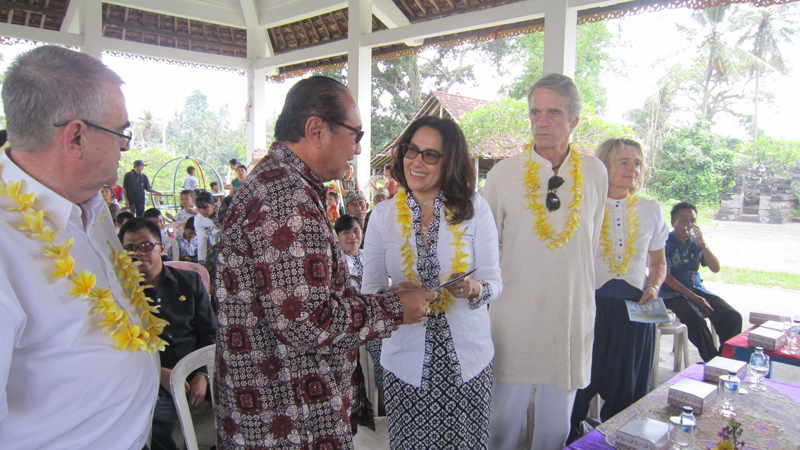 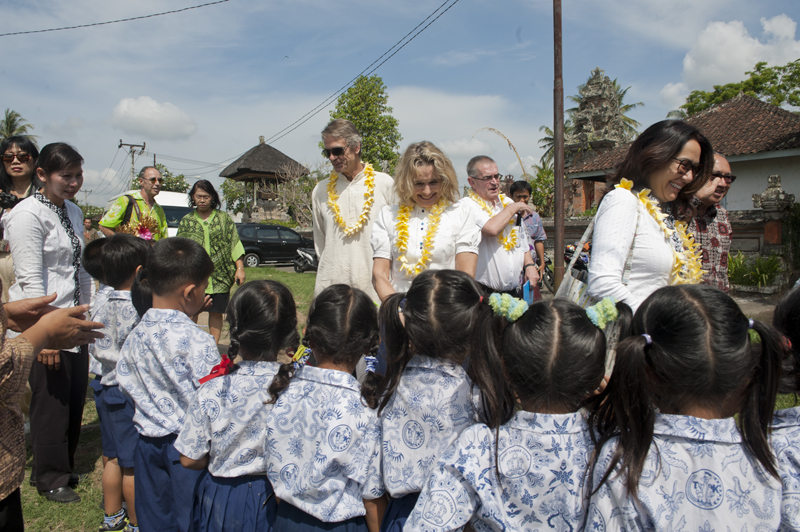 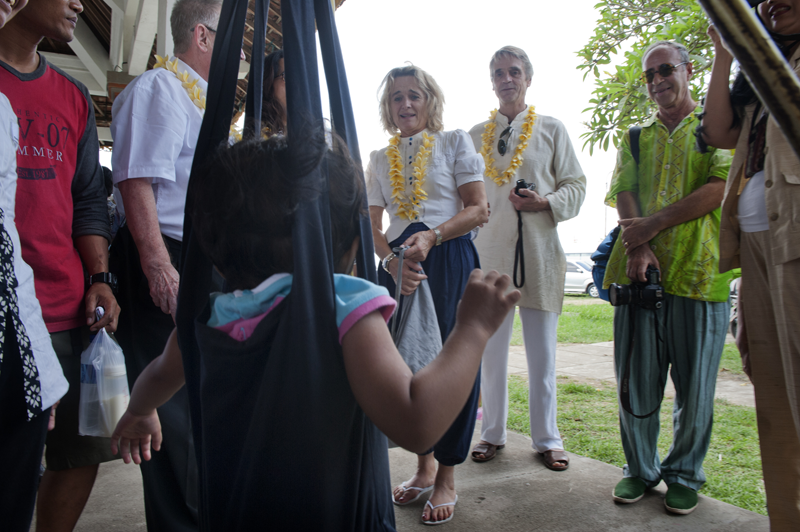