Leaving London at the cusp of summer behind, I packed up and joined my friend Kartika in Jakarta to go on a fact finding mission and do some idea plotting for her Kartika Soekarno Foundation. I have always loved this archipelago of more than 16.000 tropical islands sprinkled along the equator. I connected with Indonesia a long time ago, in the seventies, when I learned how to swim at the Kartika Plaza Hotel and tried my own version of temple dancing at Borobudur with my sister, who came to us from Manado.

Indonesia is a kaleidoscope of hundreds of different cultures with its courteous, spiritual, yet eccentric and charismatic people, united into a hub of multiculturalism. It seems this diverse island state is confidently zigzagging towards a complex, democratic, 21st Century nation.

As a newly appointed trustee of KSF, I better acquaint myself with the ‘new’ Indonesia and gather some on-the-ground facts and local intelligence.

Here I am, on a field trip to buzzing, rumour breeding, pre-election Jakarta and a 24-hour stint to Surabaya. I cannot wait to delve into this manic momentum, just before this fourth most populous nation goes to the polls. I have tried to get the gist of Jakarta’s politicking, but despite my self-prescribed daily doses of Jakarta Post and relentless quizzing of Jakartavites, I did not manage to see through the gossip jungle and short lived alliances, that get cut like lianas overnight. 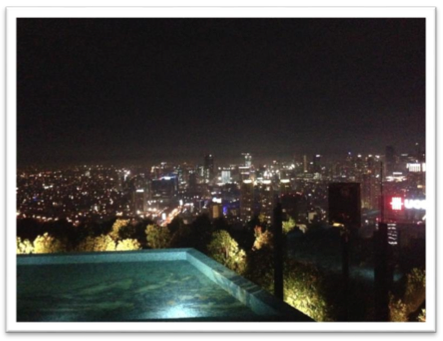 Jakarta has mushroomed into a vast and vibrant metropolis, dominated by a new generation of glam, success-hungry hipsters that even the perpetual asphyxiating traffic disaster cannot hold back. In swanky restaurants and bars they talk about pollution and education, as the elite in all global capitals does, but this does not yet translate into action for the wider public, especially not beyond the expanding city limits of Jakarta.

That’s why last November, Kartika, together with Erasmus House, had initiated a major screening of the film ‘Trashed’ with Jeremy Irons attending, to get the debate going. A jump-start initiative, which also included a new awareness campaign at the KSF Posyandus, to get the kids on the right track: Get rid-off the plastic epidemic, cut the stinging smog and ban garbage abuse.

Besides pollution, there is another sore issue in Indonesia: Education, the Raison d’être for the formation of KSF with the purpose to instigate and imply change on the school front. A humble contribution towards a prosperous and democratic Indonesia of the future. At the moment the average Indonesian child attends school about six years only and the quality of teaching is of sub-ideal standard. So KSF has launched a teacher training programme to remedy the status quo.

After spending a couple of revelatory days in Jakarta, where Kartika had introduced me to the most intriguing set of characters, a palette of opinion leaders with different perspectives and expertise: Indonesian activists and influential thinkers, diplomats, strategists, as well as local business people, many of them proper ‘Power Ibus’, it was now time to venture out for new KSF initiatives. Off to Surabaya, second largest city in Indonesia and the capital of East Java. 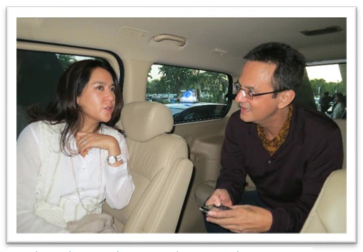  Kartika and Karim plotting on the way to the Jawa Pos.

Kartika’s friend Karim Raslan had organised an impressive itinerary: Among other Surabayan personalities, he had arranged encounters with the two most outstanding Power Ibus: Ibu Risma, famed Mayoress of Surabaya and Ibu Nani of the Jawa Pos. We almost perished en route: Heart arrest – caused by nearly missing our flight due to the endemic traffic situation in Jakarta. Just to make sure our hearts would not rest, our cheeky driver, who had picked us up at the state-of-the-art Surabaya airport, decided it was more efficient to drive against the one-way, two lane carriageway. Along with the sun set we arrived at the HQ of Graha Pena and the Jawa Pos. We were greeted by a hoard of photographers and the striking, dynamic Über-Ibu Nani, visionary and activist, who helms the PT Jawa Pos Holding. Ibu Nani whisked us through her various news rooms, all equipped with a gym and fridges for breast milk. 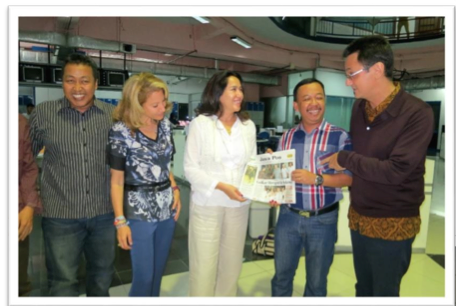 An impressive crowd of young reporters and journalists, as well as the Chief of News Coverage, Pak Arif Santoso, guided us through the 200-local-newspapers producing publishing powerhouse. I was struck by the reporters’ involvement with each paper’s respective local community. Striving to make a change and improve the lives of their readers, Jawa Pos launches pragmatic programmes from child rearing courses to accounting. There is something for everybody, especially for the hard-to-please youth. 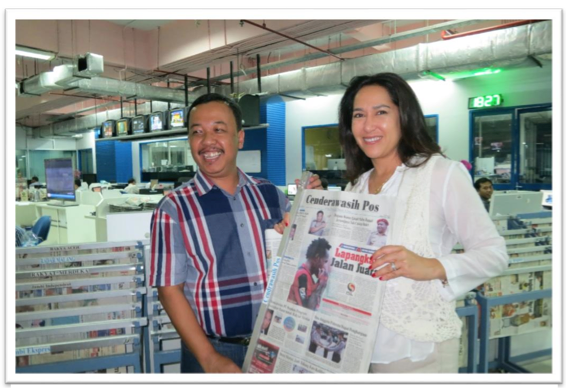 The Jawa Pos has also developed an internationally awarded women’s section ‘For Her’, spreading beauty and cuisine secrets, as well as advice on career and education issues. Here we are with the dynamo team of ‘Her’ journalistas.

Besides Kartika and me, the KSF team was represented by Juliarty Soejarman Masson, KSF’s fairy-like Operations Manager, as well as chivalrous Pak Budy Sutanto, a Co-Trustee and old chum of Kartika’s. Ibu Nani had invited us to join her and the JP correspondents for a sumptuous buffet of Javanese specialities, which was followed by an informal press conference in the board room. A frank and open ‘Q and A’ session followed Kartika’s introductory presentation of KSF. There was amiable laughter, candidness and an instantaneous connection over a range of social issues:

Empowerment of women, accessible health, the urgency of environmental awareness and governmental transparency.

It also emerged that the Jawa Pos is hosting a Posyandu Festival, and spontaneously invited Kartika and KSF to participate. What an ideal platform for KSF. In fact, it was jokingly agreed, Kartika could become the official Ambassadress of Pasyandus.

The concept of the Posyandu is actually an intrinsically Indonesian, genial tradition. 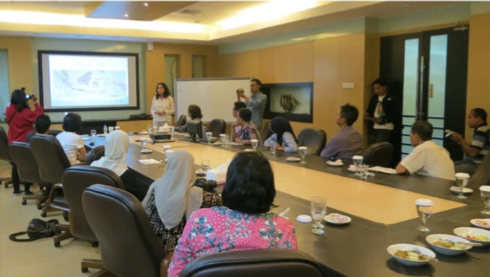 I had visited my first KSF Posyandu two years ago in Gianyar, Bali, to check out how they operate. My family and I were welcomed in a truly stately manner. To see a Posyandu in action was an eye-opener: Zesty KSF trained lady volunteers, dressed in their smart uniforms, rolled up their sleeves and helped young families and their children. Assisting with all matters on health and nutrition, the KSF Posyandus are also providing early learning tools, expertise and facilities. What an asset to have these angel volunteers pop up and serve the village community. 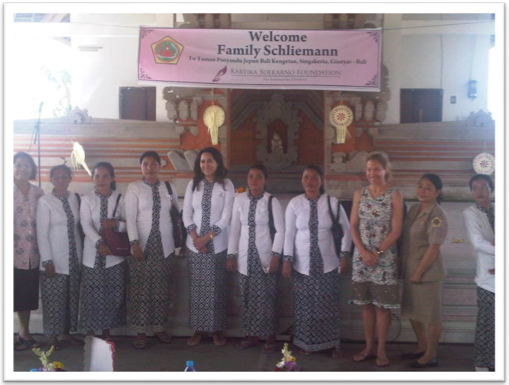